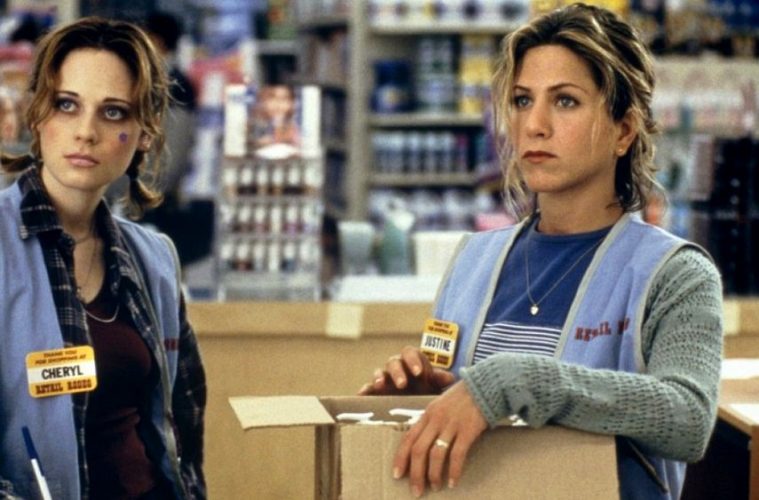 Many people may not know but Jennifer Aniston had formal acting training when she studied at the New York School of Performing Arts. After finishing her studies, she went out on some plays before she landed her first TV role. She joined the cast of “Ferris Bueller” in 1990 but it was her iconic role as Rachel Green that propelled her to superstardom.

Because she was so well-known as Rachel on TV that it was so easy to be typecast. So Aniston tried out different roles for film. But it is clear that she stayed away from very serious drama’s. She usually appears in rather light-hearted comedies. Here are her 10 best films & tv shows.

In Horrible Bosses, Aniston is sex-crazed dentist Dr. Julie Harris. She harasses her assistant, played by Charlie Day, forcing him to have sexual relations with her.  She reprised her role in Horrible Bosses 2, which came out in 2014.

This was by far her most shocking comic role to date. And critics praised Aniston’s performance in this comedy.

Aniston plays Emily Poule, the girlfriend of an up and coming rocker, Chris Cole, played by Mark Wahlberg. As Chris gains fame and fortune, his relationship with Emily becomes strained.

As Justine Last, Aniston played the wife of a pothead. She ended up having an affair with a younger man, played by Jake Gyllenhaal. But instead of escaping her dull married life, Justine finds herself in bigger trouble in her affair so she struggles to end it and go back home.

In this romantic drama, Aniston finds herself in a role opposite Aaron Eckhart. She plays Eloise, a florist with her own business who meets Burke, a motivational speaker. Sparks flew when they met so Burke pursues Eloise. As they become closer, Eloise was able to uncover his real feelings and unresolved guilt. In line with the type of new romantic comedies, her 2018 film Dumplin‘, was also quite enjoyable.

This was quite a departure from her character in Friends. She did justice to her role and was convincing as Justine. Unfortunately, film critics and movie audiences were not as welcoming.

Aniston plays Grace Connelly to Jim Carrey’s Bruce Nolan in this romantic comedy. Grace is Bruce’s  girlfriend, who is a frustrated TV reporter. As he is imbued with God’s powers, yet uses it unwisely, Grace is forced to end their relationship as Bruce becomes self-centered.

It is not easy to star opposite the talented Jim Carrey but Aniston was able to hold her own and deliver a character portrayal that was easy to connect with and was likable.

Aniston stars in this romantic comedy with Owen Wilson to portray John and Jenny Grogan. They adopt a dog, Marley, to test their readiness to have a family. Jenny soon has children and they find themselves raising a small family while taking care of an energetic Marley.

As Jenny Grogan, Aniston was funny and relatable. Though not a parent yet, she was quite convincing in portraying the frustrations of a wife and stay-at-home mom.

ered a convincing performance as the carefree yet flaky Polly. This started to build Aniston’s name as a romantic lead.

Jennifer Aniston is Lucinda Harris in this suspense thriller. Lucinda has an affair with Charles Schine, a married business, played by Clive Owen. But, during a tryst, Lucinda is raped. Then Lucinda and Charles are blackmailed.

This definitely took Aniston out of her comfort zone. She played a role that was so surprising and showed a different side to the actress.

Aniston was definitely in her comfort zone here and she breezed through this performance.

Aniston stars with Horrible Bosses co-star Jason Sudeikis in this comedy about a group of people posing as a family to smuggle drugs into the US. Aniston is Sarah, the mother of the family but was really a stripper. In one scene, Aniston does a sexy stripper dance that left a lot of tongues wagging.

Aniston played Claire Bennett, a woman who suffers from grief and chronic pain. Unable to stand or sit up straight, Claire is haunted by the death of someone in her support group.

Another off-beat role for Aniston who was practically without make-up throughout the film. Though not a blockbuster film, this film was previewed at the Toronto International Film Festival and earned her a Golden Globe nomination.

Also check out her entire filmography on Aniston Center.